No witches were harmed in the making of this post 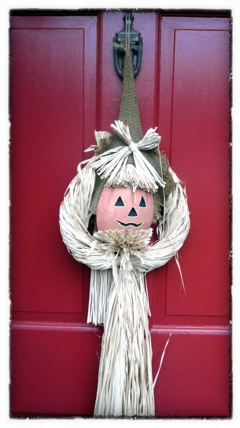 I’m pretty sad that I only got 1 trick or treater. Am I imagining that way more kids went trick or treating when I was little? I remember going trick or treating in middle school and being given candy by 8 year olds? I never understood why they weren’t out getting their own goodies! I will definitely be bringing most of my candy to work to avoid a major sugar coma. 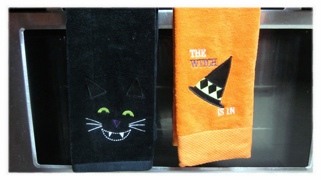 I wanted to do a recap/vent about yesterday aka by never-ending day of travel. My parents and I woke up and the power was still out! We showered in the one bathroom with a window and then headed to Einsteins with the rest of the town. The line was almost out the door! It was so good to have a bagel sandwich! They just aren’t popular in Texas…

Given the weather, I volunteered to take the train to the airport. I used the train ride to get caught up on some blog reading on my phone.
When i got to the airport, i knew it was going to be a long day. I had read my ticket wrong and had not one but two layovers. I guess that’s what you get with a ticket booked with frequent flier miles. The guy at the ticket counter couldn’t get his computer to work properly so he had to hand write by baggage tag. I had a really bad feeling about this but i really didn’t want to lug my suitcase around all day. So i took a chance and watched my bag disappear down the conveyor belt.

At this point i was a bit frustrated. But then a complete stranger made my day. I guess he had been listening to me talk to the ticket counter guy… And when i turned around, he asked if I was a singer because I had a beautiful voice. No one has ever told me that before. I was smiling for the next hour until I boarded my plane. I am determined to pay a stranger a compliment this week… To pay it forward so to speak.After an hour and a half on the train and an hour and a half in the airport, it was finally time to board.

On the plane I read the latest issue of Health magazine and made my grocery list. In no time we were in Cleveland for layover number 1!

The layover was only an hour, and it took almost the whole time to get to my next terminal. Doesn’t it seem that you always land at the furthest terminal possible? At least I got I. Some quality power walking. I always play a little game where I race the people standing on the moving walkway. It’s a great way to get in a mini workout. This time I also “raced” a girl on the escalator while I took the stairs. I won!

On the flight from Cleveland to Louisville I read a book I picked up from the library. It’s called “What Einstein Told his Cook.” the comment on the front describes the author as “Martha Stewart with a pHd.” it’s a compilation of food and cooking questions and their scientific answers. Although the book is quite factual the author has a great sense of humor so it isn’t dry like a textbook. Get ready for some random trivia knowledge to pop up in some future posts.

The last leg of my journey was from Louisville to Houston. I was so glad to finally get back to TX at 8 pm… I had been traveling since 10 am! All I wanted to do was head home… But my prediction came true… My bag never made it past Cleveland. So I sent 45 minutes filing a claim with Continental. On a bright note, both women I dealt with were so friendly and helpful! I love when I get good customer service:)

I wanted to end with some airport eats. Although I do pack some snacks, I like to splurge and eat in the airport. I know it’s quite expensive but I find it exciting to eat some fast foods that I don’t normally eat. 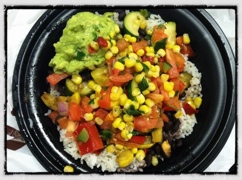 This was actually from my trip to Houston but it was my far my tastiest airport eat. Qdoba burrito bowl with black beans, roasted veggies, pico de gallo, corn salsa and guacamole. I think it was even better than Chipotle! 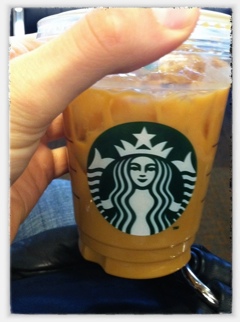 Obviously I had to get my pumpkin fix the day before Halloween! 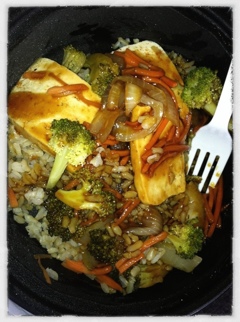 Teriaki tofu bowl. The description made it sound much more appetizing than it actually was. The onions were definitely not carmelized:(

a
Good I had two loaves of Great Harvest in my bag! 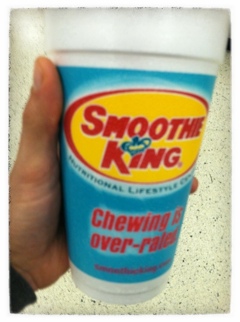 I felt so awkward when I ordered the “Muscle Punch” after the guy in front of me ordered the “Light and Fluffy.” It was tasty, but I actually much prefer my homemade smoothies.

And now a couple Halloween eats from today. 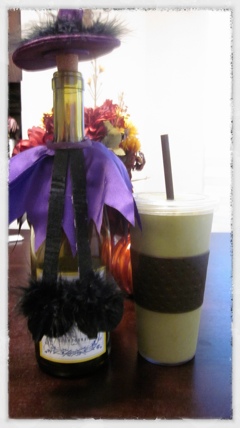 Pumpkin spinach smoothie meets the Wine Witch! (No witches were harmed in the making of this picture). 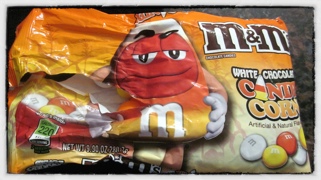 Limited edition Candy Corn M&Ms. They are uber sweet, but they are pretty good frozen.

And I leave you with my costume from today. 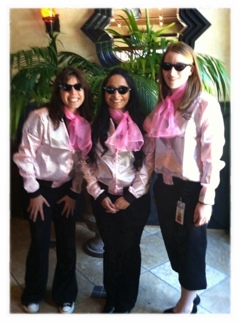 Two of my co-workers and I dressed as the pink ladies! My whole section went out to a Mexican restaurant in costume. It was a blast to see everyone dressed up.

Question: What is your worst flying experience? When I was little my whole family got stuck overnight in the Denver airport. We had to sleep under the seats. I have also had to spend the night in the baggage claim in the Houston airport.

Hi, I'm Lindsay, a 25 year old east coast engineer recently moved to Houston, TX. I love fitness (especially biking), cooking, baking, and travel. Follow my adventures in healthy living in the Lone Star State. I'd love to hear from y'all. Email me at bikingbeforebed@gmail.com